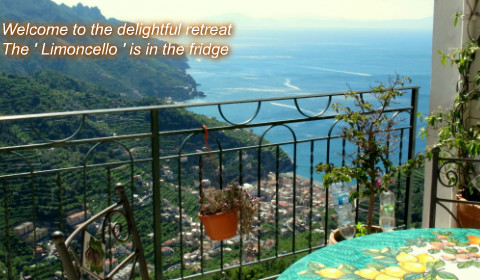 The whole route is 1.9 km with stairs.
From Palazzo Benigno Torre del Sogno apartment, go down to the left on via San Martino. It is a characteristic street of Ravello with steps and stone wall. Glimpses of the panorama.
You arrive in piazza Andrea Mansida where taking via Lacco you arrive in piazza Fontana (in via Lacco 27 ​​going down on the right, you will find the food shop Davide Langella).
In piazza Fontana I suggest taking in addition to a good coffee at Sisina's Bar, via Gioacchino d'Anna (it is a bit uphill ... but it's worth it to see and visit the most popular street in Ravello) to reach piazza San Giovanni del Toro (visit the church chosen by many to celebrate their wedding rite). The square and the small street that follows is full of fine shops as well as 5-star hotels. The street that follows the square is called via San Giovanni del Toro where on your left and just before the seat of the Municipality of Ravello there are the 'Giardini Principessa di Piemonte' ... spectacle within spectacle (almost like from Torre del Sogno).
Leaving to your right Palazzo Tolla (11th century) seat of the Municipality of Ravello, you always go down the stairs to reach Piazza Vescovado, seat of the Cathedral and center of Ravello. In addition to the Duomo (founded in 1086) I highly recommend visiting Villa Rufolo (13th century). Continuing from Piazza Vescovado and to the right of Villa Rufolo, you enter a narrow street called Via dei Rufolo which leads via a long staircase to Villa Cimbrone, also founded around the 11th century. Particular are its gardens, spectacular the view overlooking the sea.
route on google map: shorturl.at/alovx